The Lavandou, City of Dolphins and Whales

Le Lavandou is located in the "Var", a French County, on the French Riviera, right before the  « Massif des Maures ». The city spreads over 12 km of Mediterranean coastline facing the Golden Isles (Levant, Port Cros and Porquerolles) and offers a beautiful natural setting, with over 12 km of sandy beaches and small coves where nature dominates. It is a Popular seaside resort from the "Côte d'Azur" area. The city earned several distinctions for its environment: the 1st Regional Sea Prize awarded by the Provence-Côte d’Azur Region in 2008, the ”Blue Flag of Europe" for: the management of its environment and water, its preservation of the coastal heritage, its safety and beach equipment. It also flies the ”Starfish Flag" for the quality of its bathing water. 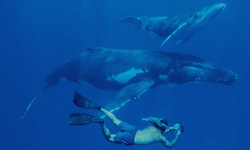 The extreme beauty of the seabed, and its rich and clear water, is very popular among divers. Boat enthusiasts have the opportunity on regular basis to spot dolphins, symbol of "Le Lavandou" (which also happens to be its nickname "The City of the Dolphins”). Since very recently, whales are also part of the picture!

Le Lavandou just signed the Pelagos Agreement, in partnership with the "Port-Cros National Park" coordinator, for a sanctuary dedicated to Mediterranean sea-mammals. Le Lavandou waters are now included in the Pelagos Sanctuary area, a vast protected marine area of over 87,500 square km (33785 Square Miles), from the waters of the Corso-Liguro-Provençal Basin. The goal of this agreement is to balance the protection of sea mammals and the needs of the economy. Thanks to this action, we can cross dolphins, and sometimes sperm whales, off Porquerolles.

If lucky, you may also spot the strong blow (up to 8 meters/26 feet high) from a fin whale, the second largest animal on the planet, as it sometimes leaves the abyssal plains to come and breathe on the calm water surface.

Finally, thanks to a high quality environmental policy, the City of Dolphins has been recognized by the regional jury of the flowered cities/villages national label and was rewarded by the 4 “flowers label”. This distinction registers Le Lavandou among the most beautiful floral villages in France.

The St-Clair beach (the 12 beaches of Lavandou)

The Villa Thalassa is located above the beautiful beach of St Clair. Pearl nestled at the foot of pine woods, the beach of St. Clair in Lavandou enjoys a special climate that makes it a special beach. Smaller than its voisine, La Grande Plage, it is more secret. Wonderfully well-exposed, the sun shines there at dawn pleasing those who love contemplating nature. In 2010, the French newspaper France Soir published a selection of the cleanest and nicest beaches of the French coast from Brittany to the Mediterranean, and the St-Clair beach was ranked first!